Sporting Force’s mission is to provide real success for those who need our support and guidance.

“WITHOUT SPORTING FORCE’S INVOLVEMENT IN MY LIFE, THERE IS NO TELLING WHERE I WOULD BE NOW”

“My motivation to find work was to stop myself slipping deeper into depression. I had undergone counselling with a civilian psychiatrist, but I felt that it did not help me at all. My personality had changed and my behaviour was causing serious problems for me and my immediate family. I attended the Manchester United open day. This event gave me hope, and I could see light at the end of the tunnel. I gained a purpose. Overcoming my anxiety and attending the open day was a massive achievement for me, and I have gained so much. I have attended training sessions and I now volunteer three days a week and work two days a week.

My family are so proud of me. I now believe in myself more. I complete things that I set out to do now; I do not give in. I have been given the confidence and support I needed. I have been kept busy and focused. I did have doubts along the way - I had negative thoughts; I thought I was not deserving of this opportunity, of all this investment in me. I had to overcome my anxiety and bouts of mood swings, but I have been given the right tools to succeed, and I now have the belief that I can overcome my illness and stop it controlling me. I have learned that I am worth something after all. I still occasionally have lows, but Tommy chases me up, supports me, and brings me back.

Without Sporting Force’s involvement in my life, there is no telling where I would be now. Over the last 10 years since leaving the army my life had become the same routine of highs and lows - so low I had three failed suicide attempts. I want to express my deepest gratitude to SF and all who have helped me to this point.”

“I left the forces as a medical discharge. I was suffering from PTSD and physical injuries to my back and shoulder, and I have restricted movement. I am a female veteran of working age who was surviving on ESA. More than half the time I had no pleasure in doing anything. I was depressed and felt hopeless, I rarely slept, I was tired, and I had no energy - I felt like a failure.

Then I went on a Sporting Force open day, which led to the NCS Leeds United Programme. It was truly a life-changing opportunity. I am so grateful to Tommy and Ricky Lowther at Sporting Force for introducing me to NCS with LUFC Foundation. This experience has given me my zest for life back, and a great chance to rediscover my abilities and expand and improve my photography skills. Most of all, I had the most amazing opportunity to mentor and encourage 15- to 17-year-olds to challenge themselves, reflect on activities and new skills they learned, increase their responsibilities, gain independence, try social mixing, inspire themselves and others. take social action, and use the life skills in their future.

I’m so honoured and proud to wear the Sporting Force and NCS LUFC t-shirts knowing what their confidence in my abilities has done for me. Thank you all so much! I am now a step closer to my dream of a career in photography and most certainly the first of many NCS programmes and future mentoring opportunities ahead.

I was the staff photographer at the 24-Hour British Karting Championship in August 2016, proudly wearing my Sporting Force team t-shirt. In November, I will once again be representing Sporting Force, this time at the Hidden Wounds Concert in the Vulcan Bomber Hanger, Doncaster. I am now on the verge of opening my own studio - I have funding and a business plan.

The network of support is phenomenal; when I have a down day and the black dog is sitting on my chest, I know that I can pick up the phone or pop into the office where I am greeted as a good friend, and nothing is too much for these guys. I was at the Phoenix Recovery Centre last week where my recovery journey began a few years back, and I am so very grateful for their continued support and introduction to the lovely Tommy Lowther at Sporting Force and X Forces. Now, my dream of a career in photography is taking shape - not long now until it is a reality.”

Testimony of a Veteran Who Completed a Three-Week Work Placement

“SPORTING FORCE TURNED MY LIFE AROUND”

“I found out about Sporting Force just as they were setting up. I was interested in taking part on a placement with Sporting Force, and living very close to Chesterfield FC, that would be the perfect club for me to get involved in. I am a left-leg, below-the-knee amputee, and I thought that there wouldn’t be a lot of things I could offer a club, but was still very keen to explore opportunities.

Tommy explained to me that, just because of the amputation, I should not discount myself from trying to do what I want to in life. Tommy challenged me at the start when I was anxious; he asked me if feeling anxious about moving forward and taking on this challenge was more overpowering than the opportunity being presented to me; he said that I should take on the challenge, and it was his persuasion that made me go for it. I am so pleased I did!

After discussions with Tommy, I told him that I had always wanted to be a groundskeeper for a football club and would take great pride in seeing the pitch on a match day looking its best. Sporting Force did not have a programme planned with the club, so Tommy contacted Chesterfield FC and explained who I was, that I lived very close, that I was a lifetime supporter of the club, and that I was very keen to carrying out a work placement with them, if possible. The club was delighted to get involved with the Sporting Force and said that they would love for me to go and do a work placement with the club, and that they would try and facilitate where I would like to work. I explained about my injury and that I might need to have a sit down every so often, and the club completely understood, saying that they would help me in every way. The club have also offered for any veteran struggling to get out the house to help with their reintegration through sports recovery, and allow the use of their gym and swimming facilities.

I attended Chesterfield FC on an initial four-week work placement, with potential for paid employment at the end of the term. The club has now offered me a permanent role. In addition to this, I work in the community running PT sessions for a local drug and alcohol-dependent group, and I am training to be a facilitator on that programme.

My biggest achievement to date is having the confidence to engage with Sporting Force who took my dream and made it reality. I never thought I would ever be able to work in the professional football industry, and without Tommy’s involvement, I would still be sat at home, unable to afford to go and watch my team in action. Now I am a team member. This experience has transformed me as a person. The feeling of achievement I have now is immeasurable. This has given me the determination, passion, and drive to go out and achieve my new career. I am thrilled that I have been given different projects within the club that they allow me to take the lead on, and that the guys and girls on the drug and alcohol misuse course look up to me and often ask me for advice on life and how they move on. I feel part of a team again; determined, proud, important, and valued. Sporting Force turned my life around.

The Sporting Force Team have, without a doubt, been fantastic mentors. They have shown me masses of support without which I think I may have given up. Chesterfield FC have also commented on the support they feel that they have received. The direct result of this is that they have more confidence in taking on more veterans. Sporting Force are now in talks with the club to bring a programme similar to the QPR one to Chesterfield. I will be involved and be taking a lead on this programme with further support from Sporting Force.” 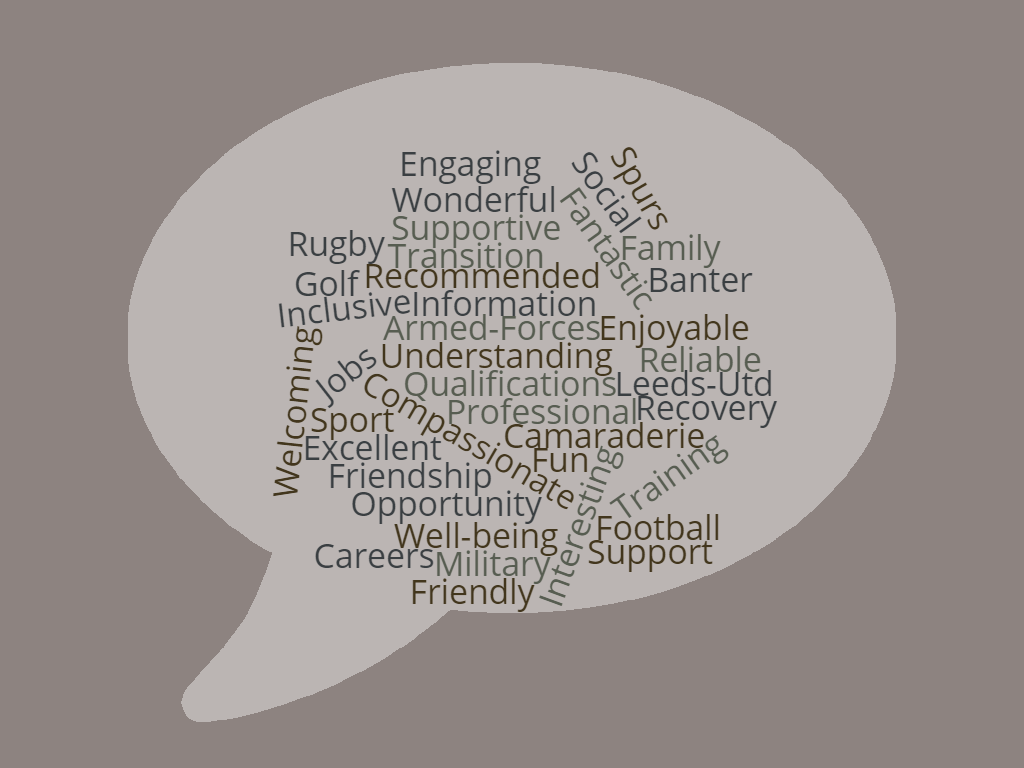 CONTACT US NOW to find out more about the ex-military personnel who have been helped by our veterans’ charity.